After six whole years at the Somerset House venue, London Fashion Week finally relocated to Brewer Street Car Park in Soho, trading in cobbles for multi-storey concrete floors. Designed by architect JJ Joass, Brewer Street Car Park has long since been an iconic art deco building dating back to 1929. The venue is situated in the heart of Soho amidst all the hustle and bustle, where it is fast becoming one the most dynamic and creatives spaces set within close proximity to major retailers.

Spanning across two floors, the new central location hosted some of the world’s most exciting presentations, including the notorious designer catwalk shows that were held in the BFC Show Space and the designer showrooms which took over the majority of the second floor. Over a hundred designers were able to showcase their latest collections to a UK and international audience of press, buyers and stylists. As well as housing all these exhibitions, the flexible space was also able to accommodate LFW’s guest registration and offer additional space for the press, photographers, buyers and sponsors lounge.

Creativity practically crackled in the air as people arrived wearing pieces they hoped would be deemed stylish by the gathered press.

During London Fashion Week, the designers themselves are only half the story, central London was teeming with fashionistas from all walks of life, with the majority of those parked outside Brewer street either hoping to catch a glimpse of a celebrity or staging their own show for the cameras. The atmosphere by the entrance to this venue was lively to say the least, with a mere pass or ticket separating the gathering crowds from the lucky few who were granted access. Roads surrounding Brewer Street Car Park were blocked, only allowing access to LFW authorised vehicles.

This creative space was designed by David Collins Studio, hosting over a hundred and fifty designers. The showrooms’ international element illustrated that London’s doors are open wide, with designers emerging from various corners of the world to further indicate London’s global influence. Out of the four fashion capitals, London is the sole city to host the designer showrooms in the same venue as the official show, which helps to shine the spotlight on the broader group of designers. These designer showrooms are vital to the overall presentation, and they are known to have aided in the launch of countless global brands to date.

This season’s  Designer Showrooms exhibited a selection of rich and diverse ready-to-wear, accessories, bags and footwear including the ones below… The Designer Showrooms space was also home to hair styling brand TONI&GUY and make up brand Maybelline New York, on hand to remedy any makeup or hair situations. Sunglasses Hut had a key presence on this floor, providing a place where guests could go to discover the latest eye-wear. On this stand, people were able to personalise their LFW tote bag by sticking on their initials in black or silver. Overall the atmosphere on this floor was inspirational and full of creative influences. 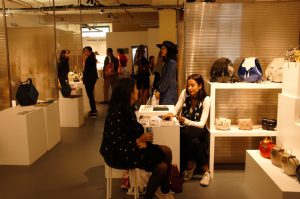 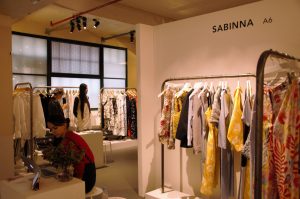 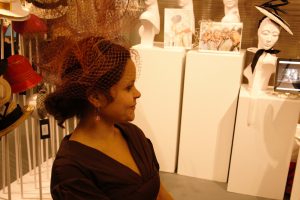 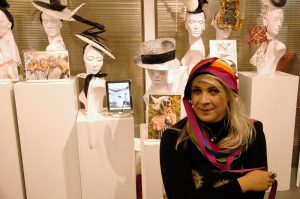 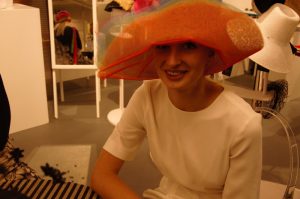 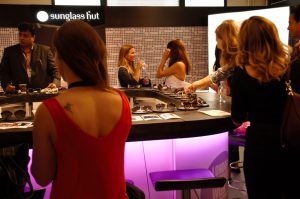 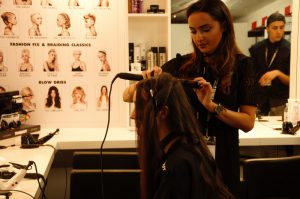 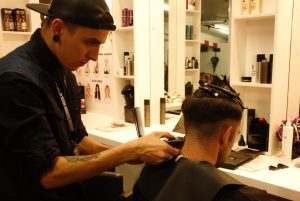 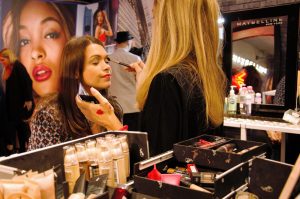 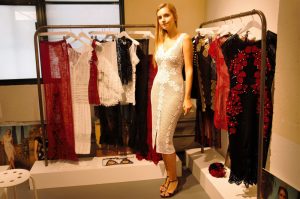 A GLIMPSE OF THE BACKSTAGE SCENE

In this part of the venue, models rendezvous with their stylists and make-up artists to prepare for the catwalk shows 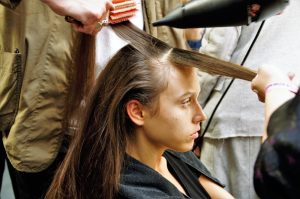 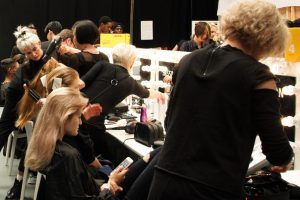 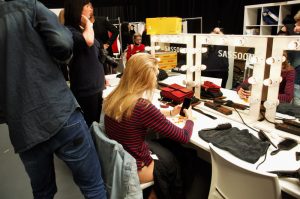 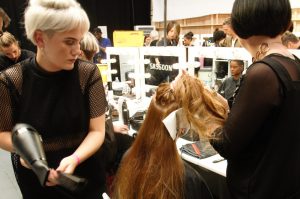 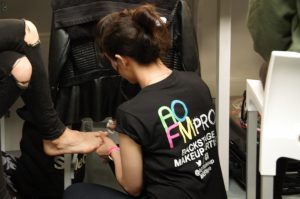 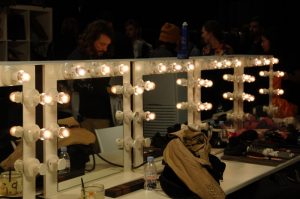 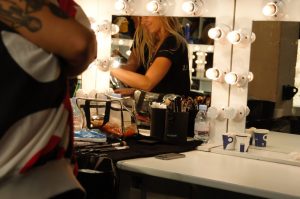 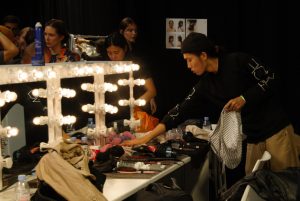 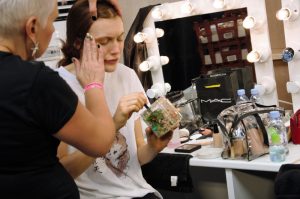 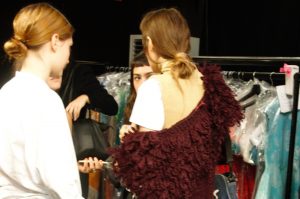 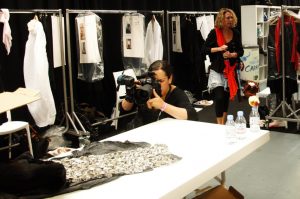 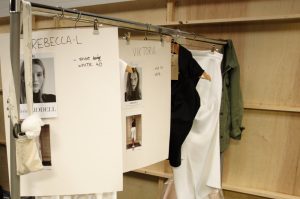 Everyone knows that back stage is where all the magic happens! Models are prepped from head to toe and left looking as fabulous as they appear on the catwalk. The back stage scene may not look all that glamorous, however it is a fast paced and hectic environment where models and artists alike achieve the seemingly impossible in such a short space of time. There is lot going on here, from hair styling and pedicures to snacking!

Overall the organisation in this place is remarkable, every single detail is accounted for, with each model’s clothing pieces hung neatly and orderly. Although the backstage scene is a direct contrast to the catwalk scene, it’s quiet concentration from the working artists and their models remains almost tangible as it continues on to the catwalk. Famed Carnaby street teamed up with the British Fashion Council in hosting a live stream throughout the duration of London Fashion week. This shopping district became a temporary home to a giant screen that streamed all the live catwalk shows and exclusive footage of all those passing by. Standing in front of the screen, a standby camera was able to capture a live shot of anyone within recording range. A camera was set up on either side of the giant screen, encouraging people from both directions to get involved.

The live footage from Brewer Street Car Park featured catwalks including Gareth Pugh, Sibling and Peter Pilotto, which helped to widen LFW’s audience and attract business to the surrounding retailers. This pop-up was designed so that central shoppers were able to experience the thrill of the catwalk in person as they watch themselves strut down the street from a huge screen. Amidst the excitement of the giant live streaming screen, weekly glossy magazine Grazia partnered with Shaftesbury in opening a LFW satellite office on Carnaby Street. Grazia was producing a special live issue during London Fashion Week issue, whilst providing a creative hub where fashionistas were encouraged to witness as the magazine’s editors worked on the piece. Opening it’s doors to the public, the magazine provided a unique customer service experience, by hosting masterclasses on beauty and fashion , live trend edits and daily fashion and lifestyle experiences from 120 brands located throughout the area.

Grazia was the only magazine offering back stage access with live backstage shooting that captured the clothes as they came straight off the catwalk. From an exclusive interview with super model Erin O’Conner to the free pouring prosecco or optional gin, this pop up was definitely a hot LFW stop. Guests were able to interact with the editors, browse the selection of clothing on the rail and were given the chance to purchase a half price copy of the recent magazine issue. However the main attraction for this pop-up store proved to be the Grazia photo backdrop, which allowed people to experience a slice of fame with their friends or companions.

London Fashion Week is never quite complete without the attendance of celebrities, half the fun of being there, apart from the dressing up and the glamour, is the potential of spotting someone famous. The event itself relies on the hype that key celebrities bring in tow. Above are some of the many celebrities that were spotted during this season’s catwalk shows.

Since all good things come to and end, as this season’s fashion show has come to a glorious end, you need not wait until the next one to look fabulous. Dress to impress everyday with a range of luxury pieces by designer brands at Zee & Co…